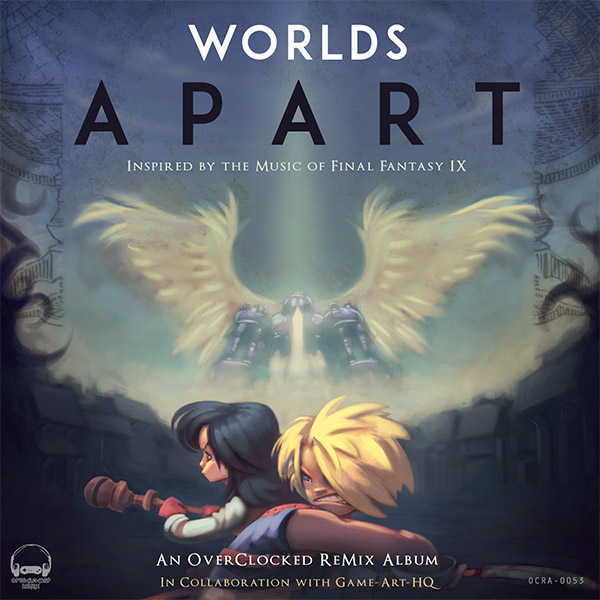 Inspired by Nobuo Uematsu's soundtrack to Final Fantasy IX (released for the PlayStation in 2000), Worlds Apart is the 53rd FREE community arrangement album from OverClocked ReMix. It features fifty-eight arrangements from fifty-seven artists in a variety of musical genres, and was published on September 9th, 2015.

Travel Through the Mist

Firstly, credit where it is due! This album project was originally started by Brandon Strader, who you might also know as the director of the FFI and FFII albums on OC ReMix. Please do check out those, and all of the other Final Fantasy albums!

As you might have heard, this album has been a long time coming. This is partly because it is humongous, featuring 58 tracks with contributions from 57 artists. Final Fantasy IX has a huge soundtrack (over 120 tracks), and the reason for this is the great number of variations on motifs. There are so many variations that we actually had to limit the number of versions of similar themes. Twice in interviews, Mr. Uematsu has said that the Final Fantasy IX soundtrack is his favourite of the series, and you can definitely tell he got carried away given the depth on display. Even if you don't agree that it's his best, I definitely think it's the most cohesive effort in the series.

One thing you might notice about this album is the amount of new faces (or new at the time) who contributed multiple tracks. This is because they actually joined OC ReMix just for this project because of how much they love FFIX. I'm personally really happy for that to be the case, as I've always thought that you can really hear when people are invested in their tracks. Spotlighting the game music you really love is what we're all about here, and I feel like that is particularly true with this album.

I'd like to extend a huge thank you to all the contributors to the album including the 57 ReMixers; the awesome artists at Game-Art-HQ; José for working on the trailer; Kevin "TheGreyNinja" Merriman for the cover art; Flexstyle for a bit of mastering; and finally djp, Larry, and the other staff for helping to get everything out the door.

Thanks for waiting, and I really hope you enjoy it!

We partnered with Game-Art-HQ to ensure that Worlds Apart is not only a celebration of FF9's music, but also its amazing character design & artwork!

Downloading the album using BitTorrent is the best option - it helps us save bandwidth and gives you the option of downloading MP3, lossless FLAC files, or both by selecting which files to grab in your BitTorrent client.

4-07 - Filtering Through the Memories

Knight of the Round

Founded in 1999, OverClocked ReMix is an organization dedicated to the appreciation and promotion of video game music as an art form. Its primary focus is ocremix.org, a website featuring thousands of free fan arrangements, information on game music and composers, resources for aspiring artists, and a thriving community of video game music fans.